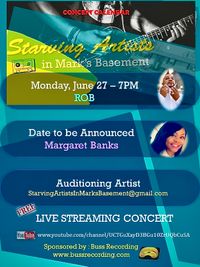 Check out ROB Rise On Belief streaming live in concert on June 27 at 7 pm on Starving Artists In Marks Basement. ROB Rise On belief and his band will be performing songs from his newly released album "Bright Fame." It will be a night of great music, powerful singing, and good times. If you never saw ROB Rise On Belief performing, get ready to be blown away because it will be a night to remember. This is a free virtual concert and there is no age limit.